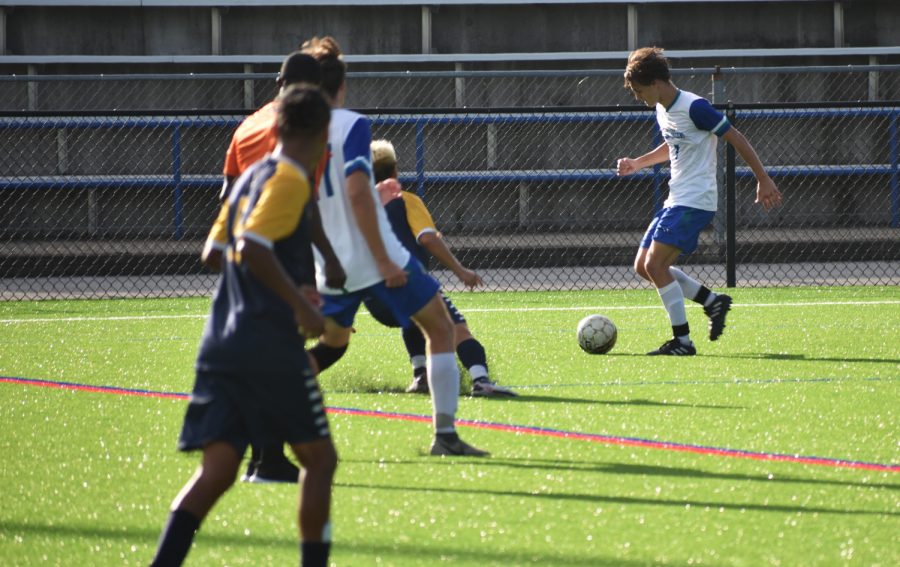 Riverhawks midfielder Jack Castle advances the ball up the field against Community College of Baltimore County during a home game last week. The game was the first on the new turf on the field at Siegert Stadium.

The Riverhawks men’s soccer team lost 5-1 Thursday to the Essex Knights in its first home game since the college replaced the turf at Siegert Stadium.

Throughout the game, the Knights, of Community College of Baltimore County Essex, dominated the momentum, kicking 17 shots and scoring two goals in the first half and three in the second.

“They played better offensively and they finished their chances,” said Riverhawks Forward Mo Sary, who scored AACC’s only goal of the game.

With this loss, the Riverhawks’ record is 6-4. The team’s next home game is Oct. 12 against Harford Community College.

Down 3-0, the Riverhawks tried to get back in the game in the second half when Sary scored. Then the Knights scored the two final goals of the game.

“The second half, we came out with more intensity,” goalkeeper Zane Sabb said. “We started to pick our heads up after the first goal and then they kept breaking us down and finishing their chances.”

“I think we lost our focus,” coach Nick Cosentino said. “I think we were a little fatigued from chasing the ball most of the game.”

Still the coaches and players said they enjoyed playing on the new turf.

“It feels amazing, like it’s good to be back on the turf,” Sary said.

“I was excited for them,” he said. “It adds a little more fun to them being back.”

AACC replaced the 11-year-old turf in September and temporarily moved soccer and lacrosse practices to a grass field near the baseball diamond.