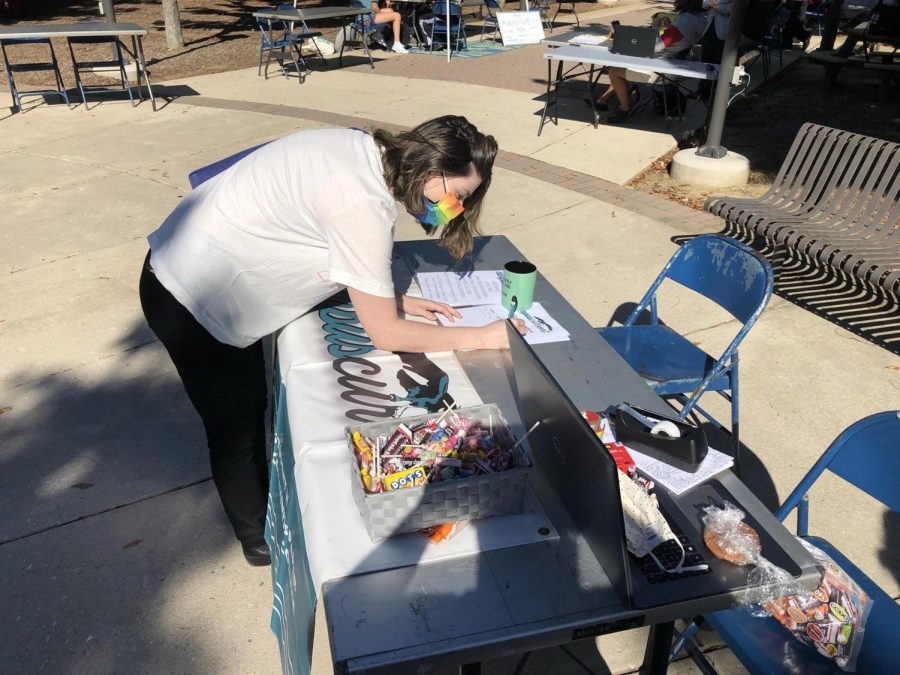 Abigail Billovits-Hayes, vice president of public relations for the Student Government Association, said she did not expect a big turnout at the fair because most students are still taking classes online instead of in person. The clubs at the fair also invited students to join them via Zoom.

“I [expected] some people to join clubs and do activities, but not a ton because [it was] really slow, at least [on the Quad],” Billovits-Hayes, a second-year marketing and advertising student, said.

Billovits-Hayes said the purpose of the Involvement Fair was to make students aware of the 15 to 20 clubs that are active this semester and invite them to join.

Before the pandemic, students ran between 70 and 100 clubs every semester.

“I feel like we might run into an issue of clubs that have become inactive because of COVID and still being inactive, and not being motivated enough to get back in the game,” Billovits-Hayes said.

Still, SGA President Ben Nussbaumer said he is happy with the way the Involvement Fair turned out.

SGA has “been planning [the Involvement Fair] for a bit and I’m proud that we got everything ready and that we’re all here because it’s the new board’s first project and I think we did a good job.”

Deserae Simoni, secretary of the Adventure Society, said traffic at her club’s table on the Quad was “pretty good” and that her team was “excited to have everybody come and hang out.”

“We’ve got a couple of new signups from people that hadn’t seen us on the Nest,” Simoni, a second-year business administration transfer student, said. It seems “we’re getting the word out a little bit better, so far, [with] people just in passing that didn’t even know that there were a lot of clubs.”

The Nest is a page on AACC’s website with information about club membership and activities.

Stephanie Jenkins, a registered nurse with the Health and Wellness Center who staffed a booth during the fair, agreed that “a pretty good” number of students stopped by, despite the low attendance at the event.

“We’ve gotten a lot of traffic, more than we anticipated,” Jenkins said. “I’m happy with the amount of students that stopped by.”

Students who attended the fair said they enjoyed learning about the clubs.

Brian Topliffe, a first-year entrepreneurship student, said he is “definitely joining the Entrepreneurs Club, 100%. I don’t know about the other [clubs] because they don’t really fit my needs.”

“It seems positive and everyone seems happy,” Claypool said of the fair. “There are so many setups that are triggering to the eye.”

Lea Brisbane, leadership and involvement specialist for the Office of Student Engagement, said a lot of students don’t realize the benefits of joining student clubs.

“It’s important in terms of their sense of belonging, retention and making sure they feel at home and have a community,” Brisbane said. “So, this is a great way for [AACC clubs and organizations to say], ‘Hey, we’re back on campus … come meet us.’”