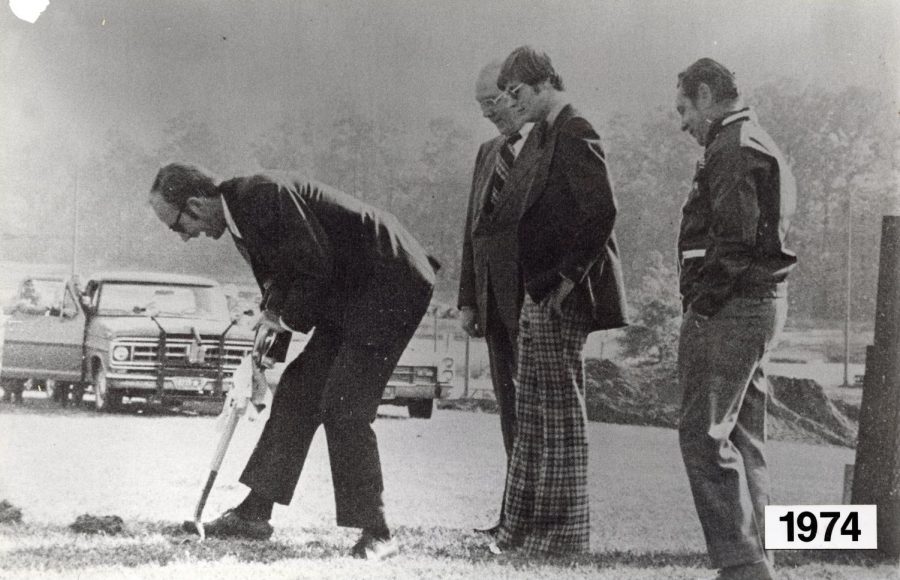 AACC's former Dean of Students William H. Dusman breaks ground in a fall 1974 ceremony marking the beginning of construction on the Student Union building on the college's Arnold campus. With him are Robert P. Ludlum, AACC’s second president, farthest in the background, and two other college officials.

AACC turned 60 this year amid a lingering pandemic that could limit the celebration.

College officials have created a 60th anniversary logo for the college’s website, T-shirts, banners and giveaways like pens and cups, and are considering a virtual exhibit and interviews with alumni and faculty who were around in 1961 when the college opened.

“It remains to be seen what we will be able to do in person as things continue to unfold,” Dan Baum, executive director of strategic communications, said. “We’re prepared to do a lot of this through social media and our website.”

AACC closed its campuses in March 2020 because of the pandemic, moving classes online. This fall the college partially reopened, offering 20% of its classes with some in-person sections. Still, most students have not returned to campus.

The celebration, which the campus Office of Strategic Communications is organizing over the fall and spring semesters, is still in the planning phase.

“I’m very excited that AACC has reached this milestone [and] to see how we can come together and celebrate, especially as we’re in the stages of our [campus reopening] plan,” Peterson, a fourth-year transfer studies student, said.

“That’s how it worked and [the college] was there until 1967, which is when the Arnold campus opened … with four buildings,” Cynthia Steinhoff, director of the Truxal Library, said.

The Dragun Science Building, Humanities, Jenkins Gymnasium and the library were the first structures on the Arnold Campus.

Baum said for more than 60 years, AACC has had a profound impact on its community and on the lives of tens of thousands of people.

The college has had six presidents since it opened. It once had a football team, which disbanded in 1989. It hosted a U.S. president as a graduation speaker in 2005 and gave a robot the podium in 1983. It added its first online course in 1996. It opened a second campus at Glen Burnie Town Center in the late 1970s and a third at Arundel Mills in 2003. And it shut all of its campuses down and converted almost all of its courses to the internet last year because of the pandemic.

“I just want students to be excited and proud of the college and its history and how much it’s expanded and changed over the years and all that it offers,” Baum said.