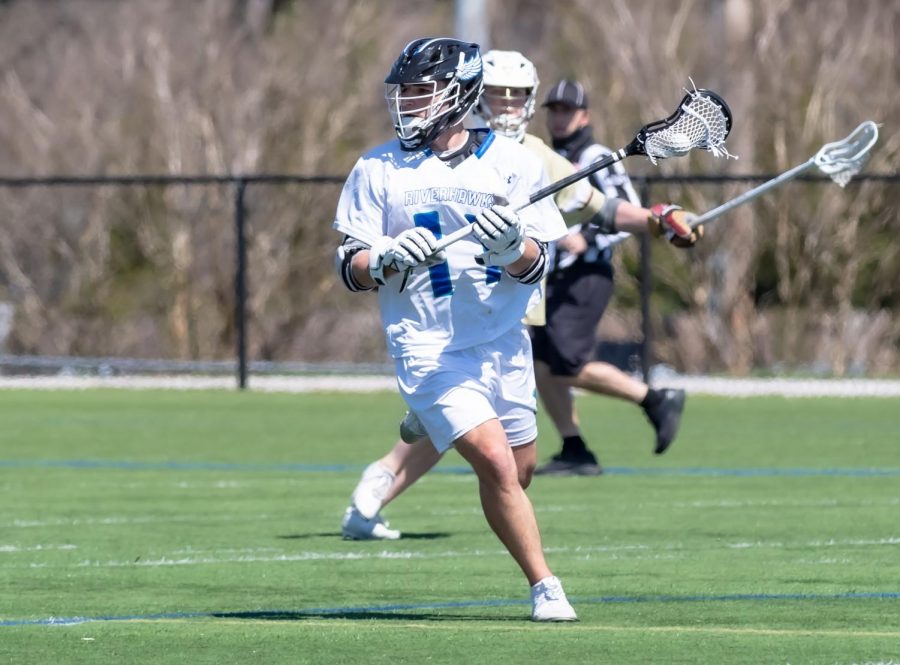 The men's lacrosse team finishes its season with a loss to CCBC Essex after being selected for an at-large berth to the national championship tournament. Pictured, defenseman Sam Weisshaar, a second-year transfer studies student.

The team, which had a 6-6 regular-season record, was selected for an at-large berth in the national tournament.

“Anyone who wins [first place] in their region is in, but any other outstanding teams in the country can be selected to advance to the national tournament,” Assistant Athletic Director of Communications Hillary Fisher explained. “We were one of two at-large teams. We did not win our region, but the runner up from the region, CCBC Essex, and our team were both selected for the national tournament.”

The team last played in a national tournament in 2017. AACC—then called the Pioneers—won the national men’s lacrosse title in 1998.

This year’s selection “was a surprise because I thought our season was over,” defenseman Brandon Grusholt, a first-year engineering student, said. “But we got a second chance.”

“We knew as a team we could match up [CCBC Essex’s] best players with our best players,” Riverhawks attackman Sam Weisshaar, a second-year transfer studies student, said. “We really just wanted to go in and give it all we had.”

Lacrosse coach Joe said he is proud of his athletes for “the way we handled ourselves collectively against a solid opponent,” Stanilaus said. “There were a lot of adverse situations, that we, for the most part, handled ourselves.”

Weisshaar is No. 1 in three categories on the NJCAA’s national leaderboard of statistics. For the 2021 season, Weisshaar was responsible for 42 goals, 36 assists and 78 points. He will transfer to Towson University to study physical therapy in the fall.

“Sam’s one of the best players we’ve ever had here in my five years—historically for that matter,” Stanilaus said. “Obviously his production was remarkable. He was a great leader, a great person both on and off the field, and a great student as well.”

Weisshaar said Stanilaus is one of the best coaches he’s ever had.

“The freedom and responsibility he made on and off the field made me want to come back the second year and keep playing for him,” Weisshaar said. “Playing for coach Stanilaus was an awesome experience.”

Grusholt said the team had a good season, despite the loss.

“I’m thankful for every one of [the players and coaches],” Grusholt said. “I think I got better not only as a lacrosse player but a person this past semester.”

“We keep a very positive environment,” Stanilaus said. “We want to make sure that the kids do the best they can in the classroom; we try to move them on to four-year schools; and we win a lot of games while we do so, so we’re very proud of them.”