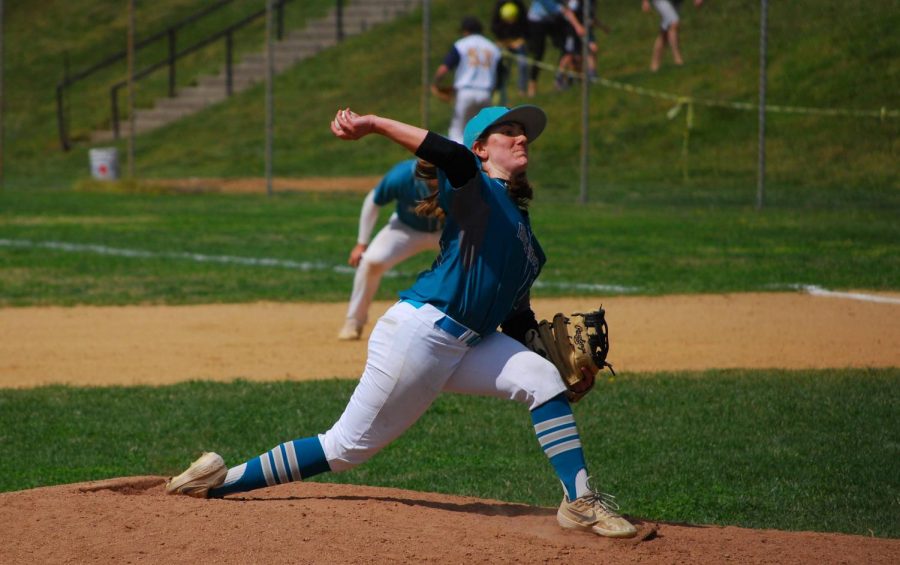 Riverhawks baseball pitcher Skylar Kaplan is the only female baseball player in the National Junior College Athletic Association. The first-year transfer studies student says she will play for the Riverhawks again next season.

The only female baseball player in the National Junior College Athletic Association pitched for the Riverhawks this season.

Skylar Kaplan, a first-year transfer studies student who has been playing baseball since she was 7 years old, said she will return next year to the Riverhawks, which finished this season with nine wins and 24 losses.

“She works hard,” second-year psychology student Ian Adams, who plays center field for the Riverhawks, said of Kaplan. “I mean, she shows up 30 minutes, 45 minutes before practice; she always does the best she can.”

Kaplan graduated from North County High School in 2020, where she played baseball for the Knights for three years.

Kaplan has a pitching style that allows her to “strik[e] out some of the best players in Maryland,” Hillary Fisher, AACC’s assistant athletic director for communications, said.

Johnny Jackson, the pitching coach, works with her “nearly every day,” Kaplan said.

“The pitching coach … has been helping me improve my pitches so that they move even more, because in the beginning of the season, I was having trouble with my changeup,” Kaplan said. “And coach Jackson told me how to tweak it just a little bit and now it’s working 10 times better.”

Kaplan said she had planned to also play on the Riverhawks’ women’s basketball team, but AACC canceled the season because of the pandemic.

The U.S. Marine Corps in December awarded Kaplan with the “Fighting Spirit” award, which recognizes players who show “exceptional leadership skills, community service or overcoming adversity while exemplifying the same fighting spirit displayed by the United States Marine Corps,” according to a USMC press release.

A member of the 40-player roster for USA Baseball Women’s National Team since she was 16, Kaplan said she  plans to try out for the 20-woman roster this summer.

She also plays in tournaments held by Baseball for All, an organization that works to bring baseball to women.

Kaplan said she hopes to continue to play baseball at a four-year college after next season.

NJCAA spokeswoman McKenzie Garrison said the association doesn’t track the number of female athletes playing men’s sports. But she pointed to Ashton Lansdell, who played on Georgia Highland College’s baseball team during the 2019-2020 season. And she said “a few” female kickers have played on community college football teams “in the last few years.”