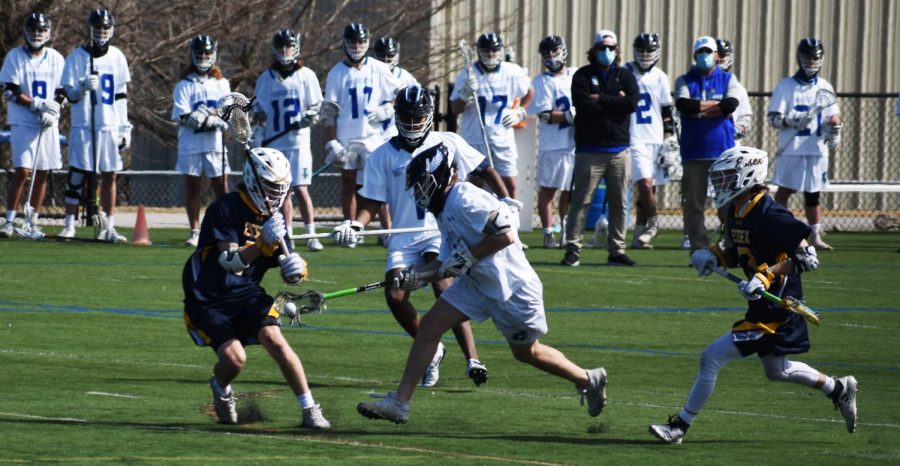 Men's Lacrosse, Baseball and Softball played their first games in a year in March. Shown, the Riverhawks face off against Community College of Baltimore County Essex.

Men’s Lacrosse, Baseball and Softball competed for the first time in March since the Riverhawks cut the spring 2020 season short as a precaution against the pandemic.

Men’s Lacrosse has played six games since March 13, winning two and losing four. The team’s next game is on Sunday against the College of Southern Maryland.

The Riverhawks played Community College of Baltimore County Essex on March 13 as their first game, losing 20-7.

Coach Joe Stanilaus said the lack of scrimmages during the practice season, which Anne Arundel County rules had shut down until early February, hurt the team. “It was the first time out … so it was a little difficult to gel early on and we struggled early on in the game,” Stanilaus said.

The pandemic cut the Riverhawks’ spring season short last March after Men’s Lacrosse had played just five games. Their record at the time was 4-1.

“I’m just trying to kind of pick up where we left off last year,” Weisshaar said, “and keep improving as a team and getting better together. [That] is what we’re kind of striving for.”

County guidelines require players to wear masks while on the sidelines, but not on the field.

Weisshaar said he felt comfortable wearing a mask because it keeps his teammates safe.

Baseball started the new season on March 2 with a double-header against CCBC Essex. The team lost 13-3 in the first game and 13-2 in the second.

The team goes into its next game against CCBC Essex Saturday with a 6-13 record.

Coach Nick Hoffner, who came on board in November, said he uses every opportunity to practice.

“I think everybody kind of learned last year that [you] can’t take [time] off, Hoffner said. “[You] can’t take everything for granted.”

The team played seven of 25-plus double-headers in before canceling the rest of the spring 2020 season.

The team started practice on Feb. 7, a month later than usual. Still, pitcher Dylan Dilts said he and his teammates were prepared.

Dilts, a third-year transfer studies student, said the players were upset when they learned county rules blocked spectators from sitting in the stands on game days, but felt relieved when the restriction ended.

Softball opened the new season with a 12-8 loss to CCBC Catonsville on March 11. Umpires halted the second game of the double-header because it was too dark. The second game went 9-3 in favor of Catonsville before it ended in the third inning.

The team will play WVU Potomac State College on Saturday. Their record this season is 1-4.

Players learned about the short season just as they finished playing CCBC Catonsville. “On the way home from that game is actually when our coach got an email from the Athletic Department saying that we were getting shut down,” Compo said.

“After that we met one time to return jerseys. And that was it.”

Compo said her team’s liveliness this season made up for the lack of fans at the early games.

After the first game, “I walked away with a very sore throat from screaming and keeping everybody up on their heels up on their toes,” Compo said. “Like, we were keeping it lively.”

“It’s a benefit … when it’s kind of cold,” Compo said. “I’m OK with it even more, because it keeps us a little warmer.”