AACC nursing program to expand by more than 50% 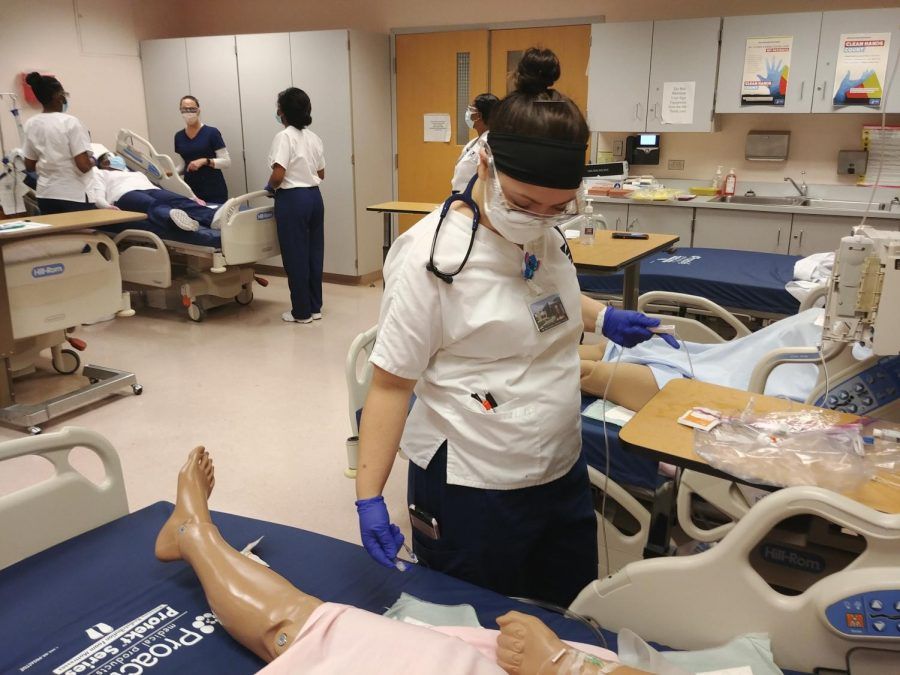 Nursing student Natasha Seeger practices her skills pre-pandemic in the Florestano building. The nursing program will expand by 54% once it moves into the new Health and Live Sciences building.

Enrollment in AACC’s nursing program will grow by 54% by spring semester 2022.

Assistant Dean for Nursing Scott Olden said the Health and Life Sciences building, which is to open in August, will have the space and equipment needed to accommodate the expansion.

Dean of Health and Sciences Elizabeth Appel said enrollment in the college’s award-winning nursing program is 104 students per semester.

“And that’s as far as we could go in … the Florestano building,” Appel said. “We are bursting at the seams in that building with all of our health sciences programs, not just nursing.”

The new building will feature open spaces and include a “simulation center” that will mimic a hospital wing.

This is the fourth time the college has expanded the nursing program, Appel said. This time,  enrollment in nursing courses will increase to 160 students per semester.

The expansion will accommodate students who are unable to register because of space limits and help to combat a national shortage of nurses, Appel said.

“Anytime you can get more people into a program like that … it’s going to be beneficial,” first-year nursing student Joe Campagnola said.

Alice Ledezma, a second-year nursing student, said the expansion will reduce the number of would-be students on the program’s waitlist.

“I know a lot of people … people I work with, that don’t live in in Anne Arundel County, that want to go to AACC’s program,” Ledezma said. “And now I know they can apply because of the fact that we’re able to expand, like the number of seats in the program.”