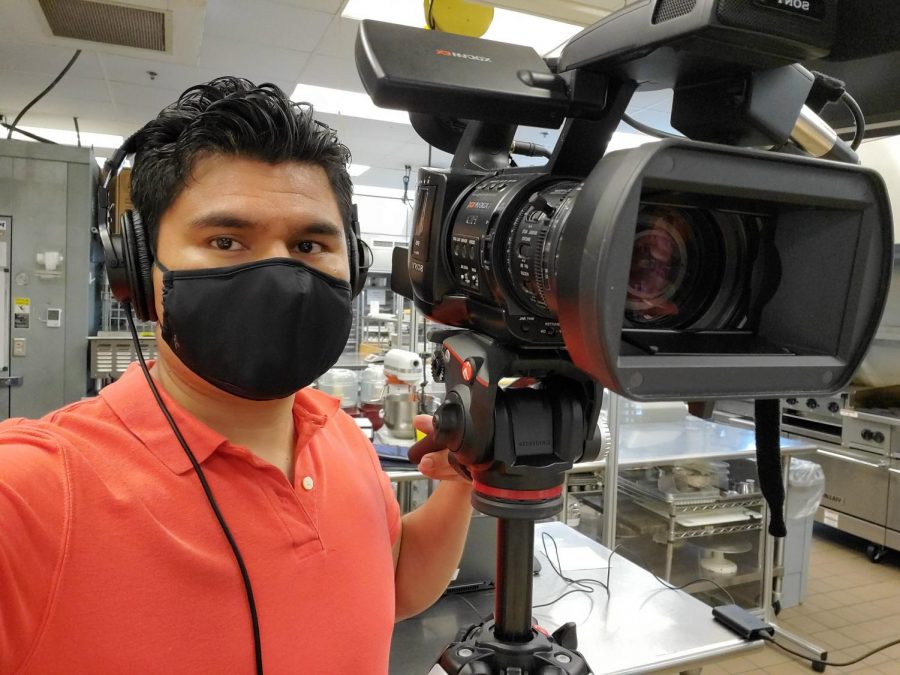 While most AACC employees are working remotely from home as they wait out the pandemic, 112 of them are still reporting to campus most days.

The college considers those employees “essential.” Among them are 31 police and public safety officers and 81 members of the Administrative Services department, which includes building engineers, grounds crew and others who take care of the physical campus.

“While many of our employees have had the benefit of being able to work remotely, being able to stay safe at home, there are the folks who have been coming in every day, being around other people to get the campus safe and clean and the buildings running efficiently,” Melissa Beardmore, vice president for learning resources management, said.

Officer Harvey Baublitz, who works for AACC Public Safety and Police and is considered essential, works on campus from 7 a.m. to 3 p.m. for two weeks a month and the switches to the evening shift for two more weeks.

According to Baublitz, essential employees working for Public Safety and Police are on campus 24/7.

Baublitz and other officers patrol campus buildings, making sure no trespassers find their way inside and that no crimes have occurred.. Officers also monitor traffic on campus, which has substantially declined since the pandemic started.

“The traffic is not there [and] the volume of people is not there and you can actually get around quicker,” Baublitz said. “There’s also a decline in incidents.”

Lt. Gary Vernon, who works on campus every weekday, said he makes sure the Public Safety work schedule is constructed so all posts are covered on campus.

“We don’t have as many daily interactions as we would normally have,” Vernon said. “The officers aren’t talking to students because they’re not here. We miss those interactions.”

Vernon is also responsible investigating any incidents occur on campus.

“We still do investigations because [incidents] do happen,” Vernon said. “Last week I did an investigation for an alleged assault that occurred off campus involving a student.”

Vernon said he works with six officers and a command staff every day.

“We keep our social distance and we are required to wear masks,” Vernon said. “We don’t have mass meetings in our office anymore, like roll calls. We send out electronic messages [to communicate].”

Michael Engles, AACC’s lead auto mechanic also reports to campus every weekday to maintain and repair the college’s 40 tagged vehicles, including those the campus uses to plow snow and spread salt during bad weather.

“There’s always something to inspect,” Engles said. “[I] never run out of work.”

Engles, who works alongside the building maintenance and grounds crews, said social distancing is the biggest precaution they take.

“Right now, we’ve been focusing on [the Hotel, Culinary Arts and Tourism Institute] tutorials for online delivery,” said Fuentes, digital media developer for the virtual campus. “I record their Zoom classes and any demonstrations. I have done other smaller videos for other departments. I record the class meeting, I edit it and put it online for them.”

A handful of professors are also showing up on campus this semester.

“Being allowed to come in to teach hybrid classes is really a huge benefit,” said Fitzgerald, who had to cancel some dance classes last semester because the college deemed it unsafe for dancers to report to campus.

Fitzgerald she and her students are taking precautions.

“We have to measure studios in 10-foot squares so each student we meet face-to-face will be in a 10-foot square and they will not go outside of the borders of that square,” Fitzgerald said. “Everybody will be masked and have hand sanitizer and the floors will be disinfected in between each class.”

According to Dan Baum, AACC’s executive director of strategic communications, other critical employees come to campus even though their job descriptions don’t designate them as essential.

Those employees work on the virtual campus team or in information services, payroll and registration, for example. Some open the mail or process mailed-in registration forms, he said.