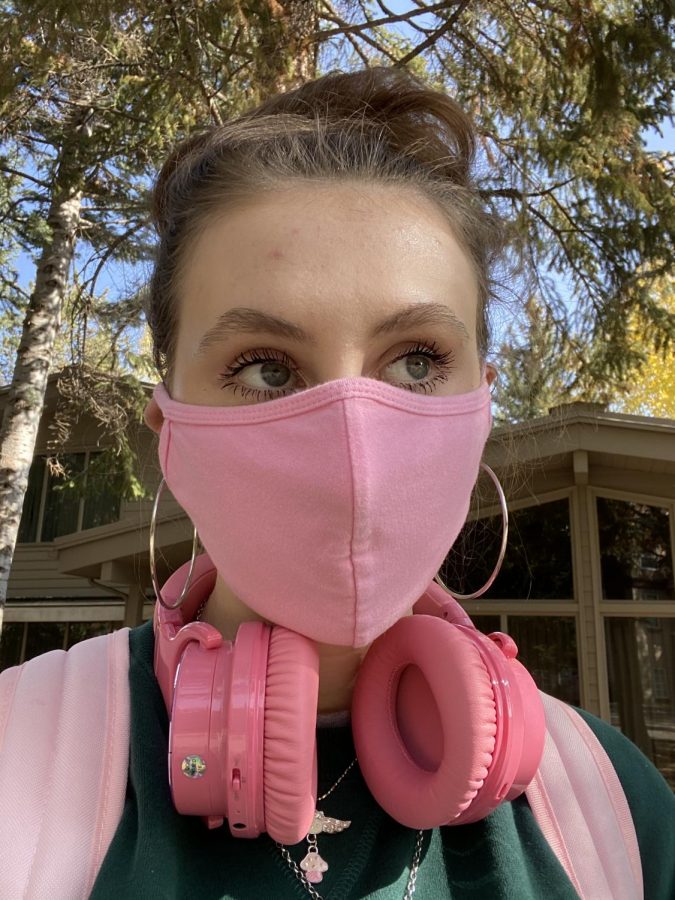 For the two weeks Amanda Harvey was bedridden with COVID-19 over the summer, her legs got so weak she couldn’t walk. Her long, lush hair started shedding, leaving it thin and short. She couldn’t taste or smell her food. She had trouble breathing. Her fever was at 104.

And she craved salmon cakes. She couldn’t wait to regain her sense of taste. And when she did, that’s the first thing she ate.

And then, pizza with no cheese or toppings.

“After having [COVID] for almost a week, I ended up having a craving for those. They did kind of work nicely—and chicken broth.”

Harvey, a second-year business administration student who is not enrolled in classes this semester, said she started feeling better in September and was able to go back to her job as a sales clerk.

Harvey isn’t the only AACC student who has suffered from COVID-19. Although not every student who gets sick reports it to the campus, officials have counted 51 students and 45 faculty or staff — most of which work remotely — and have had the disease.

Statewide, 3,750 students, faculty and staff at 20 four-year colleges and universities came down with COVID during the fall term, according to The New York Times. The newspaper did not track cases at community colleges.

Harvey compared the experience to being “a newborn infant. I needed the constant care of my mother.”

Fourth-year secondary education student Bri Barone said her initial experience with COVID-19 felt more like getting “hit by a bus.”

Barone, who serves as the student member of AACC’s Board of Trustees and said she believes she caught the virus at her best friend’s birthday party, tested positive on Jan. 3.

She wound up in the hospital for a night with severe shortness of breath and learned she had pneumonia. She felt like she had just “run a marathon,” she said.

“My chest just started hurting because I was trying to do everything that I could to get as much air in as possible,” Barone added. “And it … still wasn’t enough.”

Shortness of breath is one of COVID’s main symptoms.

Chrystal Jones said she knows that better than most.

Jones, a fourth-year elementary education student, has suffered from asthma since she was a child, which put her at risk of experiencing severe symptoms, like difficulty breathing, if she caught the virus. After she tested positive for COVID-19 in November, she experienced nausea, fever, coughing and wheezing.

“I remember just like thinking and hoping that it was fake and hoping I don’t have it,” she recalled. “I was so worried that it was going to be so bad for me, and I wasn’t going to be able to get through it. And thankfully, it was just by some miracle, it didn’t hit me as hard as I was expecting. But on the breathing portion, it was really hard because it felt like I was having one long asthma attack. … That was scary as all heck ”

Jones also lost her senses of taste and smell.

“I didn’t taste anything,” she said. “I usually don’t like a lot of spicy foods … [but] I could straight up just guzzle the hot sauce.”

She recovered after about two weeks.

First-year psychology student Odalis Escobar also said she couldn’t taste or smell anything for at least a month and a half after first getting sick in March.

Escobar first realized she had COVID-19 when she took a bite of a pizza her family ordered and couldn’t taste it.

Without the ability to taste, she said she lacked the motivation to eat and lost about nine pounds.

Escobar said she suspects her stepfather, who goes to work every day at a construction site, passed the disease to her mother, sister, sister-in-law, and her.

“He was around workers who were not wearing their masks,” Escobar said. “And [some of them] thought they had just a little cold or something, but it was COVID because … we ended up having similar symptoms as his workers.”

Likewise, Moriah Thompson, a second-year pre-med student, caught the virus from a family member in June.

Thompson, who had been sheltering at home, said she did not expect to get the virus, and when she started feeling ill, she thought she had a cold, not COVID.

But after her family learned her brother’s co-worker tested positive for COVID-19, all nine members of her family, and household, got tested and all but two had the virus.

A severe, persistent headache landed her in the hospital for about a week. She said she feels well now.

Second-year transfer studies student Matthew Brown’s illness persisted as well. In fact, four months after he recovered from COVID-19, he got it again.

Brown said he got his second set of positive results on Christmas Day.

Brown said the second time he either caught the virus from his dad or his stepmom, who both tested positive, or from working out at the gym.

The first time he had a worse experience because he did not realize he had the virus and continued to exercise while he was ill.

“The second time I was more proactive in kind of figuring out what was wrong with me,” Brown added. “Even though I didn’t feel that bad, I’m saying I was much better.”

First-year creative writing student Marquart Doty is doing better too, after feeling sick with the virus and quarantining for two weeks.

Doty traveled in an RV with a friend across the country last fall and tested positive when she returned home to Baltimore. But she said she thinks she got sick from an unmasked pizza delivery driver who did not stay six feet away from her.

Doty said she experienced exhaustion, coughing, a sore throat and shortness of breath.

“I also had a raging headache the entire time,” she said.

Having COVID-19 also took a toll on her mental health. “My anxiety and depression just felt really exacerbated,” Doty said.

Alice Ledezma agreed that the virus takes a psychological toll on patients.

“It was really difficult on me mentally,” she said. “I think a lot of people don’t really understand the psychological impact that losing your senses has on a person.”

Ledezma, a third-year nursing student, said she couldn’t taste her food for more than a month and a half. Her sense of smell took even longer to get back to normal, she said.

“No one ever really talked about that, like the mental toll it takes on you,” she said. “So … yeah, just be aware that [it] can happen, and you’re not alone. That would be probably my biggest advice. Yeah.”